Every year children throughout the world miss 443 million days of school because of water-borne illness. We know that access to school is absolutely essential to a country’s sustainable development, and yet water insecurity and lack of sanitation places so many hurdles in the way that it becomes difficult to make headway toward educational goals.

Unsafe water is responsible for several diseases, the most common of which is diarrhea, which kills 1,600 children a day. Other water-related illnesses include cholera, malaria, trachoma, and worm infestations. Students miss class when they themselves contract these diseases, but also when they have to stay home to care for infected parents and siblings. And, when a teacher is sick, classes are cancelled altogether so that all the students in a class miss out on their education. 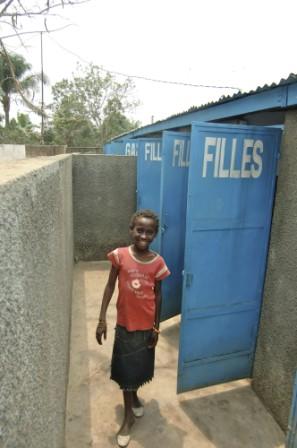 Unfortunately, issues of water and sanitation disproportionately affect young girls, who spend as many as six hours a day carrying heavy water containers from distant wells back to their homes. A study in Ghana by World Bank Group found that reducing the time it takes to collect water by just 15 minutes resulted in an 8-12 percent increase in the proportion of girls attending school, demonstrating how the burden of fetching water negatively affects education.

The obstacles multiply as girls get older. Puberty is a challenging time for any child, and in the developing world the situation is compounded by a lack of sanitation facilities. Girls are often forced to share a common toilet (assuming one is available) with male students. The intimidation and threats they suffer as a result of this lack of privacy leads many to miss school or drop out altogether. In India, this tendency was well documented by an evaluation of the educational impact of a large school-latrine-construction initiative. The study found that sex-specific latrines versus unisex latrines made a crucial difference in boosting female enrollment.

Failure to provide adequate facilities for girls at school, creates a downward spiral that further entrenches the gender equity gap. Studies show that the more time girls are in school, the less likely they are to get married and have children of their own at a young age. For example, according to a study report by the International Center for Research on Women (ICRW), education was the strongest predictor of the age a woman will marry in 18 of 20 countries with the highest prevalence of child marriage. “Secondary education specifically emerges as the factor most strongly associated with reduced prevalence of child marriage,” write ICRW authors Saranga Jain and Kathleen Kurz, “but primary education was the most important for younger girls, many of whom marry at an early age.”

Water and Sanitation for All

The Sustainable Development Goals recently adopted at the UN’s Sustainable Development Summit seek to further tear down obstacles to school attendance such as a lack of access to potable water or a lack of clean, safe bathrooms at school. Removing these barriers represents a vital step toward tackling the global education crisis that is affecting 124 million children; thankfully, available solutions are relatively simple and inexpensive, and are highly effective.

The SDGs pay special attention to the needs of girls as they pertain to water and sanitation, recognizing that they are especially vulnerable to the effect of poor water access and quality. SDG Goal 6 seeks to “achieve access to adequate and equitable sanitation and hygiene for all and end open defecation, paying special attention to the needs of women and girls and those in vulnerable situations.”

Planet Aid’s support of educational development includes initiatives that aim to improve water and sanitation in rural and school environments. In the Democratic Republic of the Congo, for instance, we supported projects to increase water security and improve education by drilling wells and installing bathroom facilities. From 2007-2014, our local partner, HPP-Congo, constructed more than 22,000 latrine slabs, drilled more than 50 new wells, captured nearly 90 natural springs, and built nearly 300 latrine blocks in primary schools in the provinces of Kinshasa, Katanga, and Equateur. The project was part of two national water and sanitation programs: Healthy Schools and Healthy Villages. 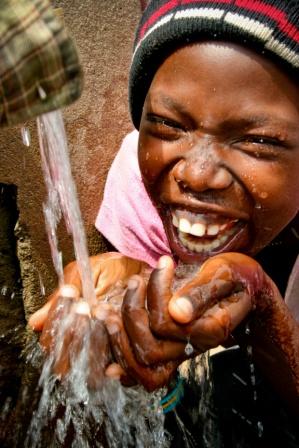 In Mozambique, Planet Aid is currently implementing the Food for Knowledge project, a school feeding, nutrition, and education initiative funded by the USDA. In addition to providing school meals, the project is also providing schools with access to clean water and improved sanitation facilities. By building wells, installing water pumps, and creating separate latrines for girls and boys, the program ensures that schools have the facilities students need to stay in school. The project has proven highly successful thus far, resulting in a 72 percent increase in water access for the 65,000 participating children.

In both villages and schools, investments in water and sanitation greatly increase access to education for children. The construction of wells and water filtration systems removes the burden of fetching water from young girls and minimizes the prevalence of water-borne diseases that force children to miss class. Additionally, the establishment of separate, private bathrooms for girls and boys in schools that are nearby, clean, and safe prevents the spread of disease and lowers the risk of assault.

We can begin to build a better world by making clean water accessible and implementing sanitation facilities. Solving the water crisis is one of the first steps to getting more kids in school and, the more kids there are in school, the more opportunities they will have to improve their lives and the lives of their families. Education is a basic human right and the basis of all development, so let’s get kids in school by making sure they have all the resources they need to succeed.

Isabel Silva is a Communications Specialist at Planet Aid.

EDGE Institute exists to promote and provide education that leads to effective engagement across global borders. We work to break down barriers and open doors for relationships.
Learn More »