This mentoring session covered a lot of serious topics like HIV/AIDS, Slavery, and Violence Against Girls/Women

The 6th of December was a warm winter morning when we, the Didis (Nepali for elder sisters and what the girls call us mentors), and the Rukmini Scholars (bahinis = younger sisters) gathered together. It was a very meaningful day for all of us for many reasons. First, because we organized a session to cover topics like HIV/AIDS and slavery as well as were participating in the UN Secretary General’s Campaign UNITE, to End Violence against Women. We Didis knew that to talk about these serious issues and to really engage and help our younger sisters understand, we had to also have a fun activity to go with this. Luckily, this time of year many people in Nepal also celebrate a festival called Yomari Pune! Yomari Pune is the full moon festival, when we offer to the gods a particular homemade sweet called Yomari. Our idea was to have a fun program around this festival while talking about serious topics in a group setting. 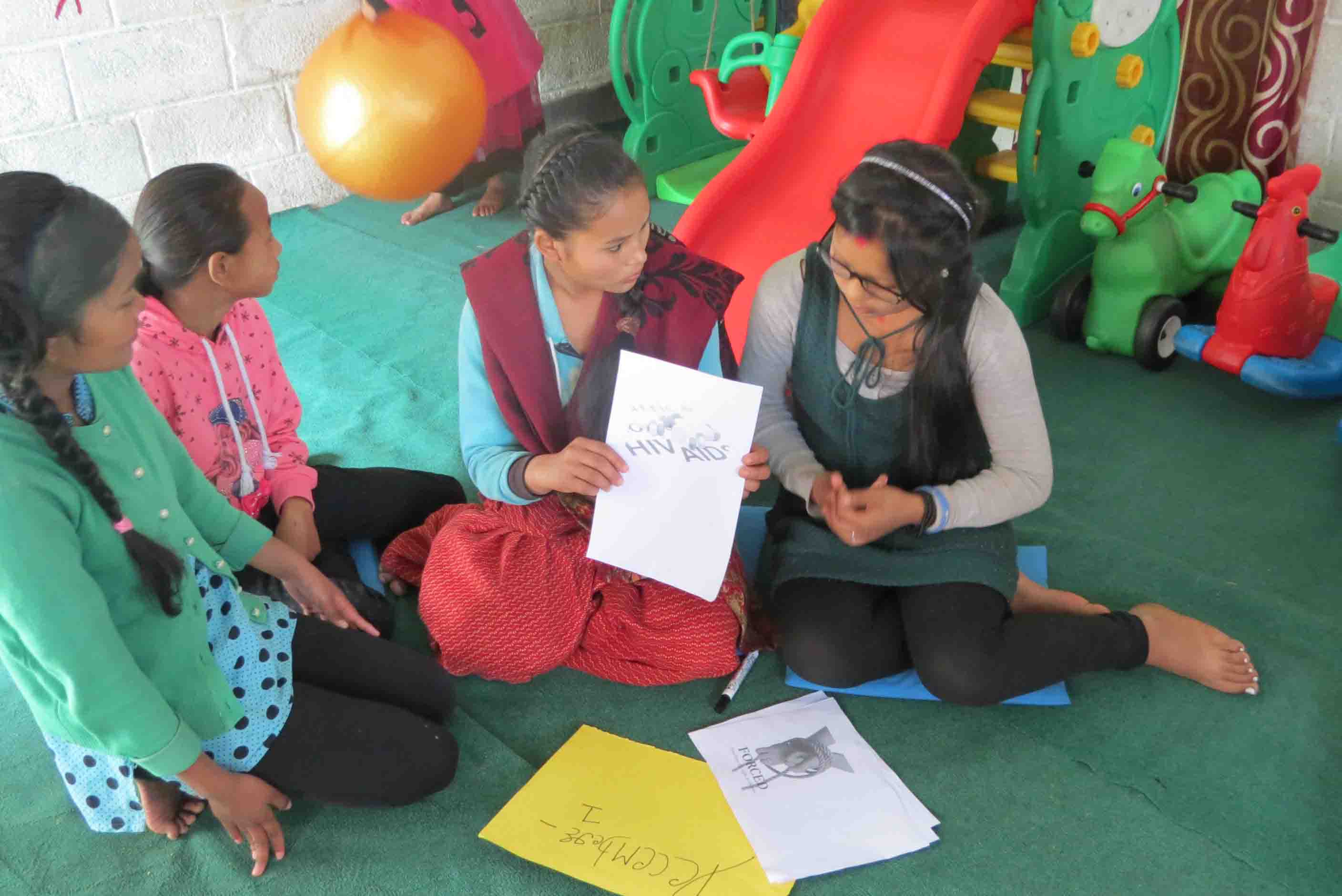 We all sat around in a friendly circle and placed some pictures and drawings related to these topics in the middle. We introduced ourselves and the purpose of our session. We began by discussing about the significance of World AIDS Day (December 1) and International day for Abolition of Slavery (December 2) and the #orangeurhood/#orangeurworld campaign to End Violence against Women. The bahinis were given a few pictures related to these topics and asked to choose the ones they most identified with for the signaled dates. We were a little surprised that many chose HIV/AIDS to discuss, but it was because they were well aware of AIDS, its causes and consequences. World AIDS Day is celebrated by many organizations in Nepal and it has led to a better understanding of the disease and those affected by it. One of our bahinis, Anju took the lead and explained to the group what she thought was the importance behind World Aids Day. She talked about how serious the disease was and felt it was important to stop the spread of this disease. We were proud to hear that many of our bahinis were aware of the disease, especially since many young girls around the world of their age are becoming victims of AIDS and other diseases due to lack of awareness and protection. 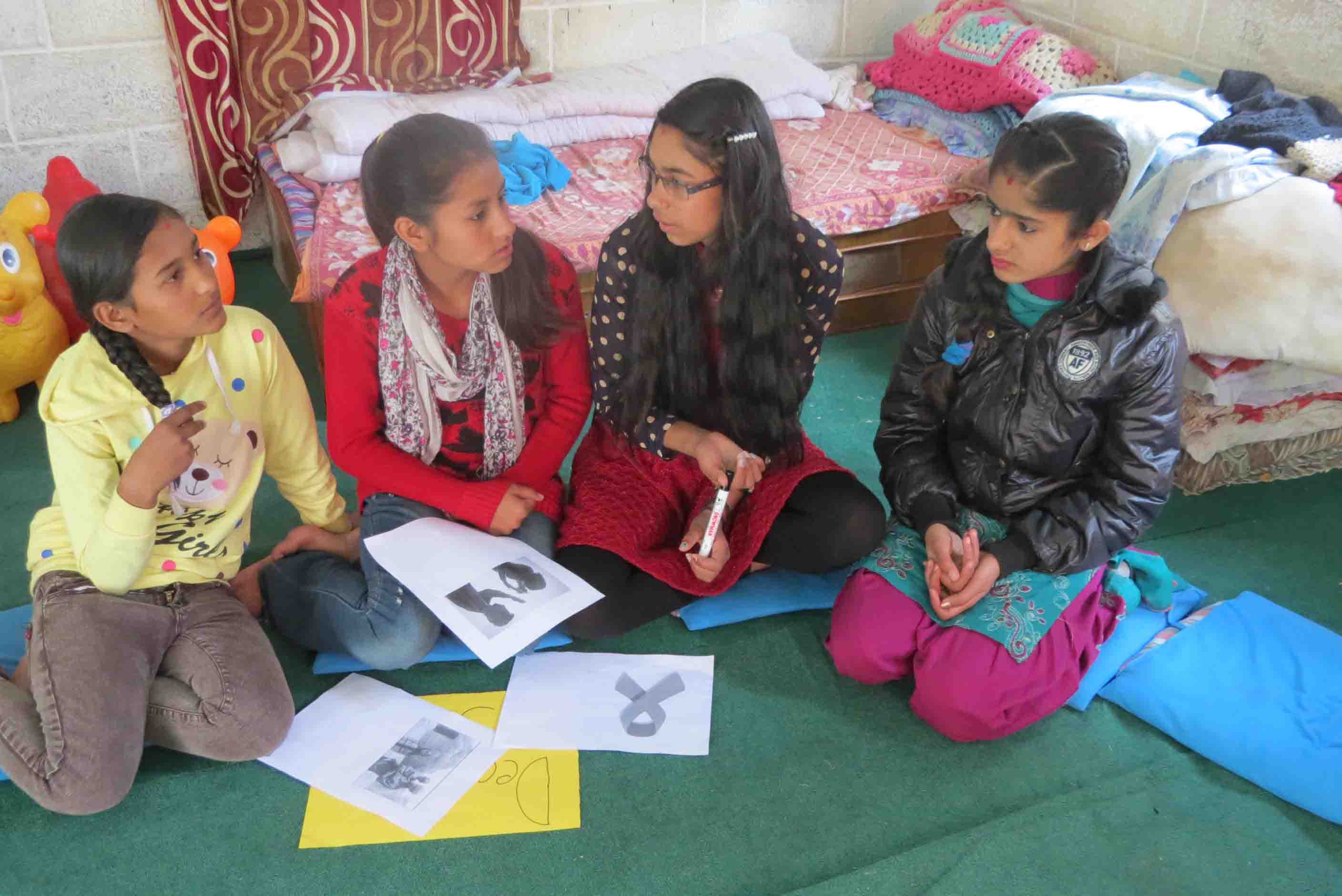 There was much less awareness about slavery, but we were able to give good examples to help them understand.

While the group seemed very aware about HIV/AIDS, they were not as aware about the International Day for the Abolition of Slavery. This was illustrative of the situation in Nepal and the amount of work yet to do in raising awareness around such a violation of Human Rights. One way we were able to help them understand about slavery was to use examples they could relate to. We talked about how thousands of people leave Nepal every year to work overseas in places like the Middle East and end up working and living in terrible conditions where the employers take their passports and do not pay them what they were promised. Many families in Nepal have heard of a father, uncle, brother or sister leaving for work and never returning. We also talked with the girls about these dangers and how to seek help or advice if they have a family member who is considering this type of employment overseas. 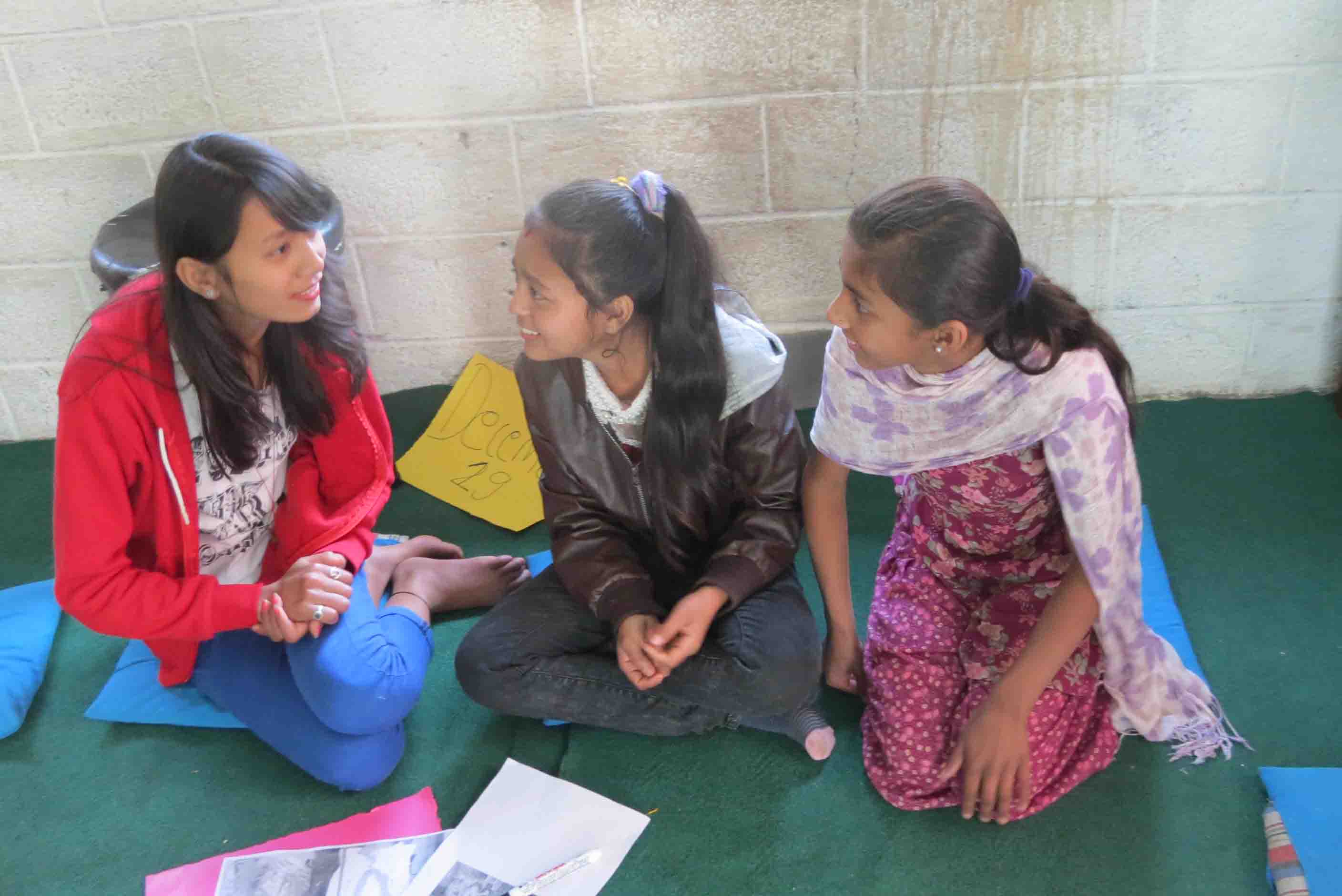 There is another very real form of slavery that the girls could easily relate to, and it is the practice of wealthier families "adopting" a child, usually a girl, from a poor family so that they will take care of her as she works around the house. This type of "adoption" is now an illegal practice, but it still happens to many poor girls in many parts of Nepal, including the communities where these girls are from. Often the families adopting the child, do not provide any education and end up abusing the child instead of taking care of her as promised. We talked with the girls about how to recognize the danger of this happening and how they could seek help from the Didis, the foundation and their school teachers if they think something like that is happening to someone they know. Finally, we talked about human trafficking and how girls in Nepal are in danger of that, and how to ask for help if the bahinis see that happening. Hearing about these examples made the girls much more aware of the types of slavery and the dangers. Knowing that they had a way to talk about these issues and people to go for help made them feel empowered. 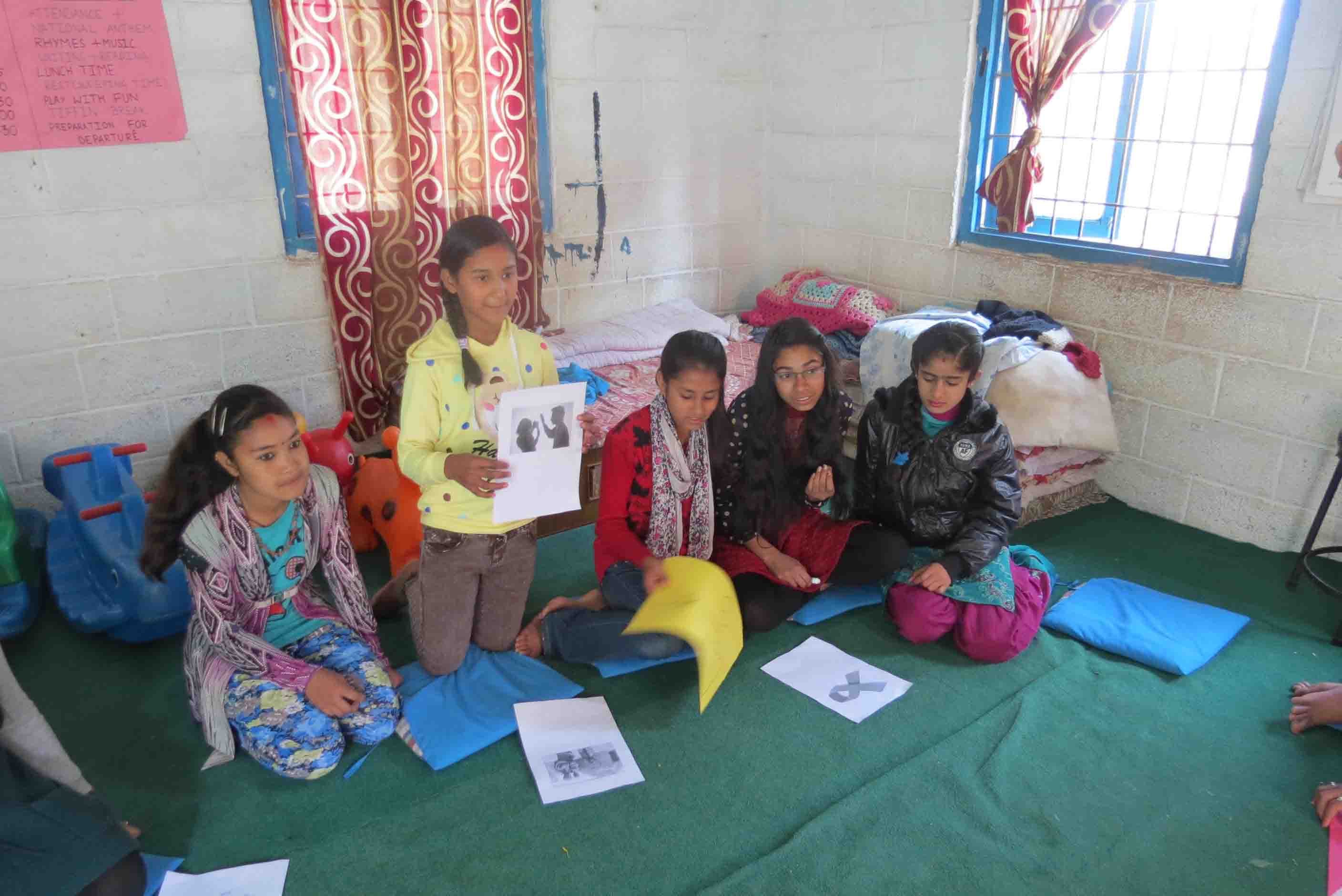 Our serious discussions ended on the topic of a very serious issue in Nepal, violence against women. The scholars were very keen to learn more about the issue since it is very common in Nepalese women’s everyday life. We discussed the various forms of social, political and cultural violence that girls and women face, and we were very impressed with our bahini Sujata who shared with us some common examples of cultural violence such as the Dowry system and Chaupadi, a practice that forces women who are menstruating to sleep in sheds, with minimal social interaction and protection from the weather. Bahinis Susmita and Ashmita came up with ideas on how to protect themselves from such violence, and they believed that education (for themselves and their families) is the best tool to end gender violence.

Sujata brought up practices like Chaupadi, where girls/women who are menstruating are forced to sleep in sheds, with minimal social interaction and protection from the weather, thus causing illnesses and even death in some cases due to being exposed to the outside climate with no protection. 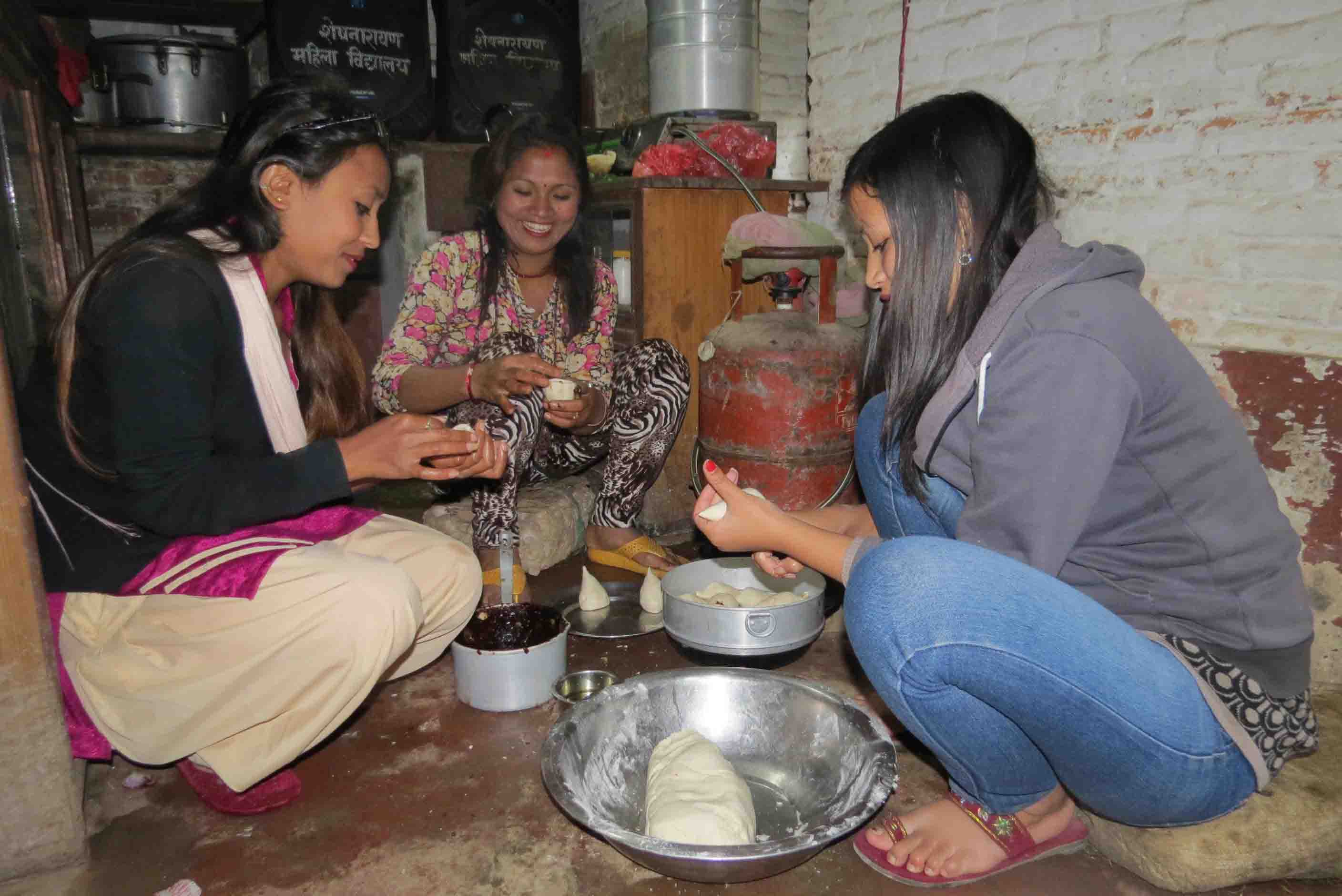 After the serious discussions, we wanted to provide a nice treat for the girls

The bahinis were very engaged throughout the discussions and offered up great examples, ideas and thoughts. Seeing them interact with each other and with us in this way makes us Didis very proud of them. Once the serious portion of the session was over, we wanted to make sure the bahinis had a chance to enjoy the Yomari Pune festival with delicious yomari (a local delicacy eaten during this time in Nepal) prepared by didis Rasmita and Parmila. It was really a very meaningful day for all of us, full of thought, reflection, fun, and empowerment! 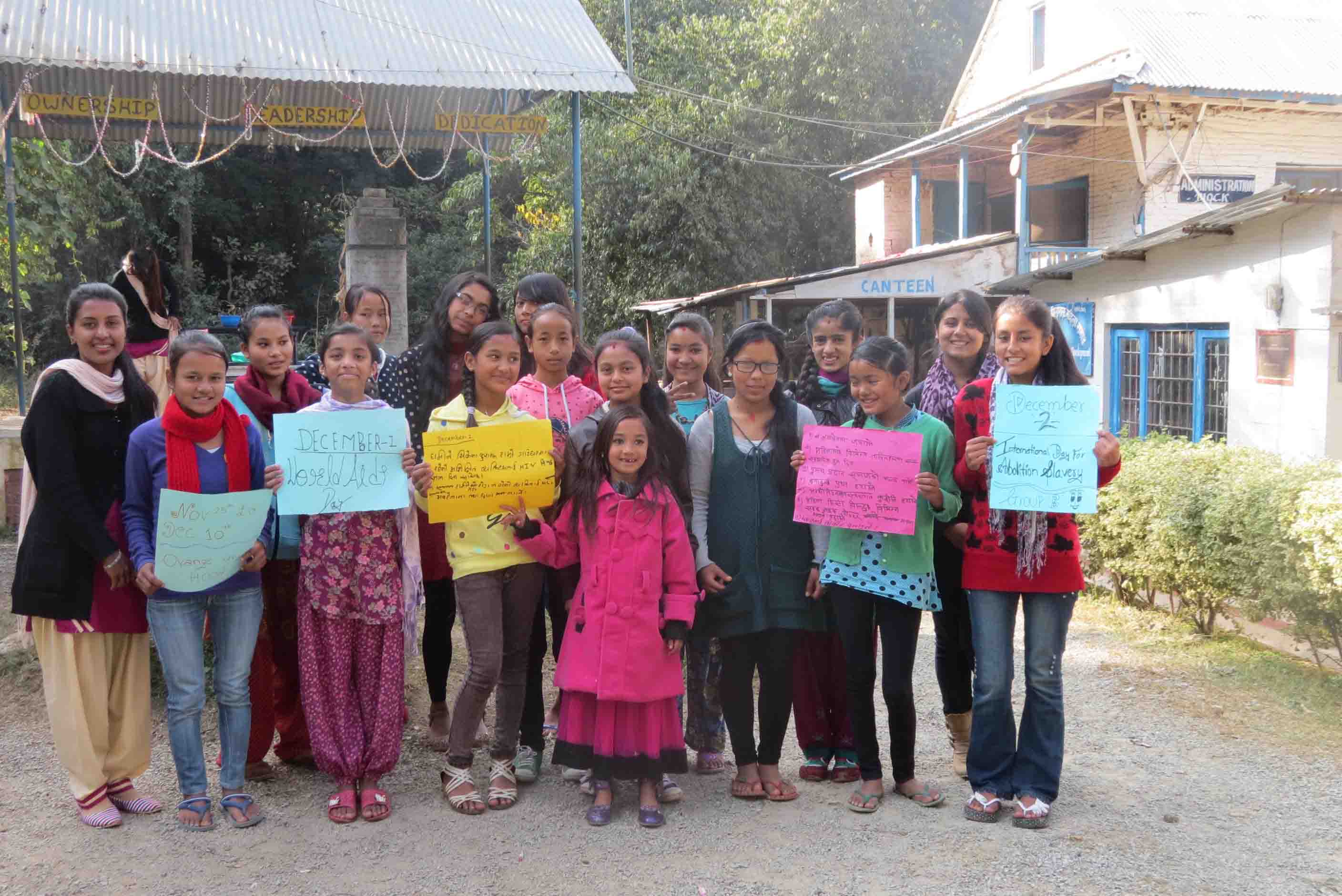 Another great Didi session ... thank you to all of the Didis and the Bahinis who participated very well.

Prabritti Nepal is a Didi with the Rukmini Foundation.

Planet Aid’s mission is to inform, mobilize, and inspire individuals and communities to work together to bring about worldwide environmental and social progress.
Learn More »