“What if you just write, ‘in the street, everything you can imagine happened to me,’?” her teacher responds.

We have worked with youth since 2012 to publish illustrated memoirs. ConTextos’s program, Soy Autor (I’m an Author), started with at-risk youth living in neighborhoods with high levels of gang activity, and then forayed into juvenile detention centers and prisons.

I taught my first class to youth on the “outside.” They are the famed “youth leaders,” members of student government and participants in programs like “Congressperson for a day.” They are the role models held up for all the other children to see. They know their success stories well but often leave out essential parts from the middle.

When I’ve heard teachers or acquaintances talk about youth in El Salvador, I’ve noticed two important paradigms around their public identities. Youth that follow the rules and are successful academically earn praise and the most important roles at school and in the community: masters of ceremonies, parade leaders and presidents. The community’s focus is on everything good and exceptional in their lives, a successful public self. The second paradigm openly condemns youth who have come into conflict with the law. Their public self is reduced to that of a criminal and nothing more. People advocate “burning down the prisons” with the inmates inside; the perception is that their crimes have stripped them of all humanity. Inside or outside, these youths’ current circumstances suggest divergent pasts with no intersections.

Their stories, however, are almost indistinguishable.

At first, it didn’t seem so. Students in my class of youth leaders wanted to write about their day in the Salvadoran National Assembly and their dreams of entrepreneurship and politics. They wanted to write stories that obviated the struggle in the middle, stories that were composed of what they thought people wanted to hear. However, in Soy Autor we pushed harder. The story about the National Assembly became the story of the only time a student’s mother told her that she was proud. The story dedicated to a father’s love came to include the anger, hurt and fear of when the student’s mother disappeared on her birthday. One student began his story three classes after the rest, but was fully dedicated to writing about how he refused to join his “friend’s” gang. Many of our students had a story that they had been hiding, a wound that was unhealed. In the end, their publications included books about abandonment, loneliness, and abuse. “I had held this in for so long, I didn’t realize it was hurting me,” commented one student.

“A few more steps and we came to the backdoor. I heard blows, pah pah pah. Afraid, I said, ‘I don’t want to go in.’

‘Okay, no problem, but you know what will happen if you don’t make the right decision. You have one week.’” 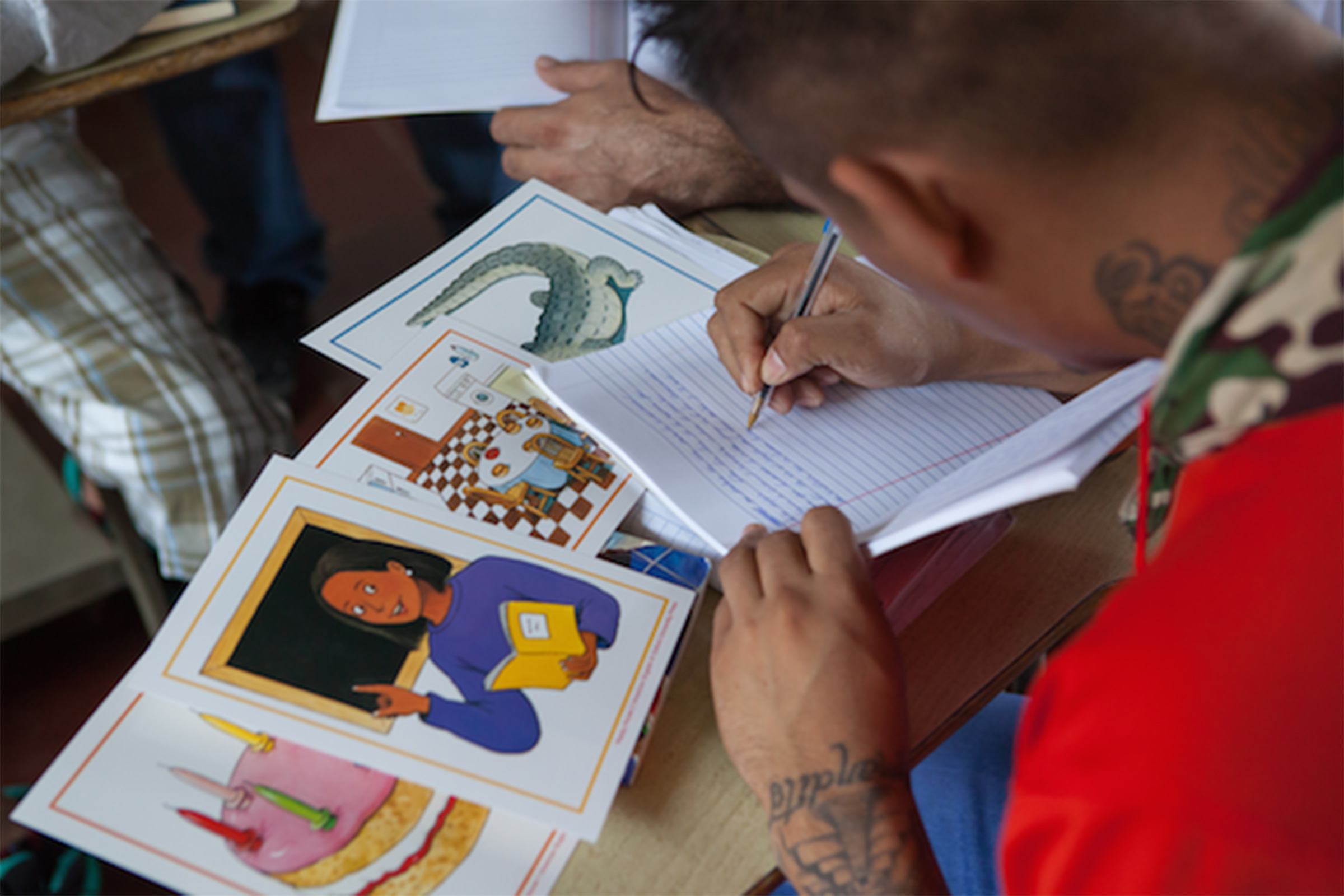 You can find trauma in the memoirs by student inmates, but you also find stories of first loves, becoming a parent and many other beautiful memories. When we invite our students to brainstorm what they will write about, we ask them to think about an “important moment in our lives.” Very few inmates, if any, write about the reason they are in prison. They are anxious to share the parts of their identities that Salvadoran society doesn’t want to see. It is much easier for the public to divide their blanket approbation and rejection between “inside/outside.”

“It made me even happier when [my son] first pronounced the word: papá. I felt very proud, because he still calls me that today.”

Soy Autor challenges El Salvador’s assumptions about our youth and forces us to wrestle with multi-faceted individuals. Our youth leaders on the outside share experiences like parental abandonment with their peers on the inside. Both write about the joy of a first love and the birth of a new family member. Their stories make it impossible to draw a clear line between the successful and the hopeless, inside and outside. If we listen, if we read, our authors teach us about the landscape of Salvadoran adolescence. They invite us to wonder, what made the difference? What will make the difference?

“I was very little when [my mom] left to turn herself into a machine, to work and help me have a better life. But I didn’t understand that day when my aunt, a tall woman with white skin and long hair, became my mother.”

The first two quotes in this blog are from our class with youth from student governments and the last two are from students in a juvenile detention center. The complete collection of Soy Autor memoirs can be found in their original Spanish at https://issuu.com/contextos-sv/stacks.

Anne Ruelle is the Programs Associate at ConTextos, a non-profit dedicated to reshaping the educational experience of children in El Salvador so students go beyond rote memorization to develop authentic literacy skills such as deep-thinking, analysis and creativity.

The Child Labor Coalition (CLC) exists to serve as a national network for the exchange of information about child labor; provide a forum and a unified voice on protecting working minors and ending child labor exploitation; and develop informational and educational outreach to the public and private sectors to combat child labor abuses and promote progressive initiatives and legislation.
Learn More »