By adopting the Sustainable Development Goal 4 (SDG4), states around the world committed to the ambitious goal of achieving access to inclusive and quality education for all and promoting life long learning by 2030, reaffirming their commitment to education after the expiration of the Millennium Development Goals. Despite this renewed focus, international aid to education has been steadily decreasing since 2010 and remains inadequate to accomplish SDG4 by 2030. As the funding currently stands, even if low and middle-income countries increase their domestic funding to education significantly, we will still have a projected annual financing gap of US$39 billion.

If our goal is to improve equity and ultimately to achieve universal access, these unbalanced priorities are deeply problematic. While investing in higher education is generally a good thing, in many countries higher education funding is most likely to benefit children and youth from more advantaged backgrounds, who already had the means and access necessary to complete primary and secondary school. For instance, more than 90% of university students in Malawi and 57% in the Republic of Congo come from the wealthiest quintile. In contrast, children from the poorest and most marginalized circumstances need assistance long before higher education. Many don’t have access to even a basic education, including pre-primary and primary school, and most will never have the chance to reach university. Privileging funding for tertiary education means the majority of education aid won’t ever reach kids that need it most. Helping the most advantaged is not the purpose of donor aid.

So what’s the alternative?

A growing body of scientific evidence shows that early investments in children’s learning and development lead to higher academic attainment in primary school and work effectively to close the achievement gap for disadvantaged students. Numerous studies have demonstrated that early childhood development programs are more successful and less expensive than later initiatives for older children or adults and result in bigger payoffs down the road. Early learning and pre-school programs are especially impactful for disadvantaged children, helping get them on the right track for success in primary school and catch up to more advantaged students. While aid for higher education generally only reaches privileged students who are already successful, aid for early childhood programs works to prepare all children, and particularly poor and marginalized kids, for academic achievement. 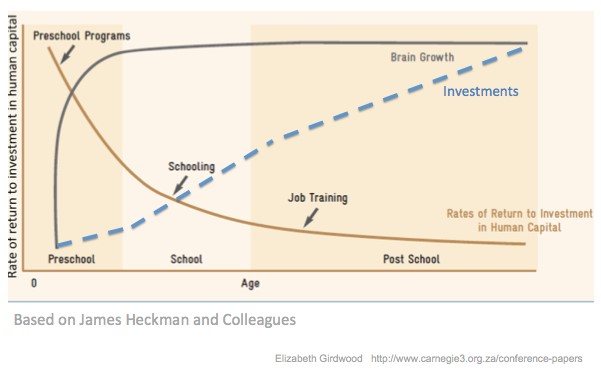 Investing in early childhood programs, including early learning and pre-school initiatives, is by far the best bet for getting quality education to the poorest and most marginalized children and ensuring their success in school. Current investments do the exact opposite of what the evidence recommends, prioritizing higher education most and pre-primary education least. Professor Stephen Lye illustrated this point exceptionally during his speech at the World Bank and UNICEF’s launch of their early childhood development alliance on April 14. His graph (at right) clearly shows how current investments in education aid work at cross-purposes to what studies suggest are the most effective interventions.

If we actually want to approach expanding access to quality education through a lens of equity, it is critical to not only close the funding gap but also to change our aid priorities. Education aid needs to be realigned to better reflect scientific evidence, and specifically funding for early childhood development programs must increase. Otherwise, the most privileged children will continue to benefit and the most marginalized will still be left out.

Molly Curtiss is a Research Consultant at Theirworld.

As the DC office of the Union for Reform Judaism, the Religious Action Center educates and mobilizes the Reform Jewish community on legislative and social concerns, advocating on more than 70 different issues.
Learn More »