The mentioning of the name of the girls’ education project IGATE in full to stakeholders and communities was always greeted with many interesting questions: “What about boys?”; “Do you want parents to forget about the boy child and focus on the girl child?”   These were some of the questions that were quickly asked by the communities and stakeholders.  Explanations and clarifications about the project’s support to boys’ education were not easily understood. This story provides a detailed account of how IGATE is also benefiting boys’ education with specific reference to the case of Thulani Munkuli, who was assisted by the Mothers Group (MGs)[ii] to re-enroll after dropping out of school. This is just an example of many such cases happening in many schools where IGATE is operating. 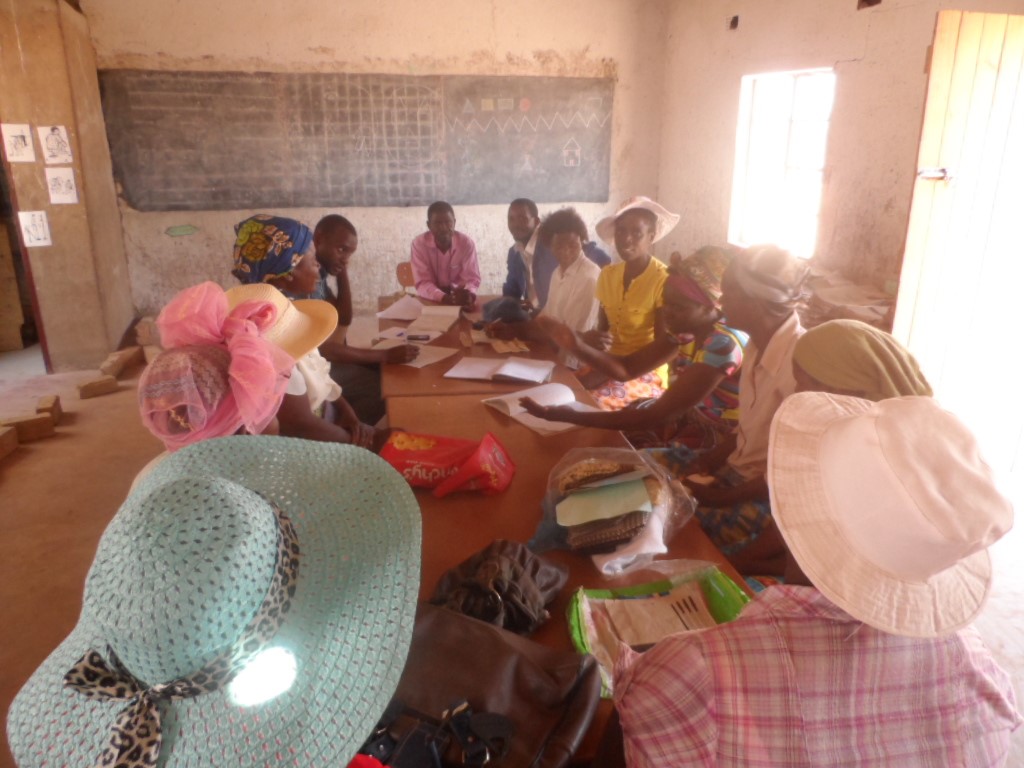 Thulani Munkuli is a 14 year old boy who is enrolled in grade 4 at Lubimbi Primary School in Binga district in western Zimbabwe. He stays with his mother and his 11 year old younger brother. His parents divorced in 2011 when he was 10 years old.

Unlike his peers of the same age, his education life resembled that of lost hope punctuated by constant drop-out.  For example, it took him two years (2009-10) to complete grade one: he dropped out in his first year of school and re-enrolled the following year. He progressed in 2011 to complete his grade two before dropping out again and spent the next three years out of school.  He mentioned two reasons as having contributed to his drop-out: the first one was that his mother lacked sufficient money to meet his educational expense; while the second reason was that he had developed negative attitude towards school because of poor performance. During the period he spent away from school, he spent two years herding cattle for other people in his community to support his mother and raise money for food.

When Thulani’s mother agreed to have him back at school, the Mothers Group knew that the issue was still far from being complete. “ Taking Thulani back to school was never a problem, the real problem was to deal with the issue that led him to drop out of school in the first place which was limited funds to meet his educational expenses,” remarked one Mothers Group member.

In order to address the problem, the Mothers Group wrote an application letter to the school authority (the School Head and the School Development Committee) requesting for Thulani to be one of the pupils benefitting from the Orphans and Vulnerable Children school fees payment intervention led by UNICEF under its School Improvement Grant (SIG) programme. The involvement of the School Development Committee members who are also part of the Mothers Group was noted as one major factor which contributed to the success of the application. 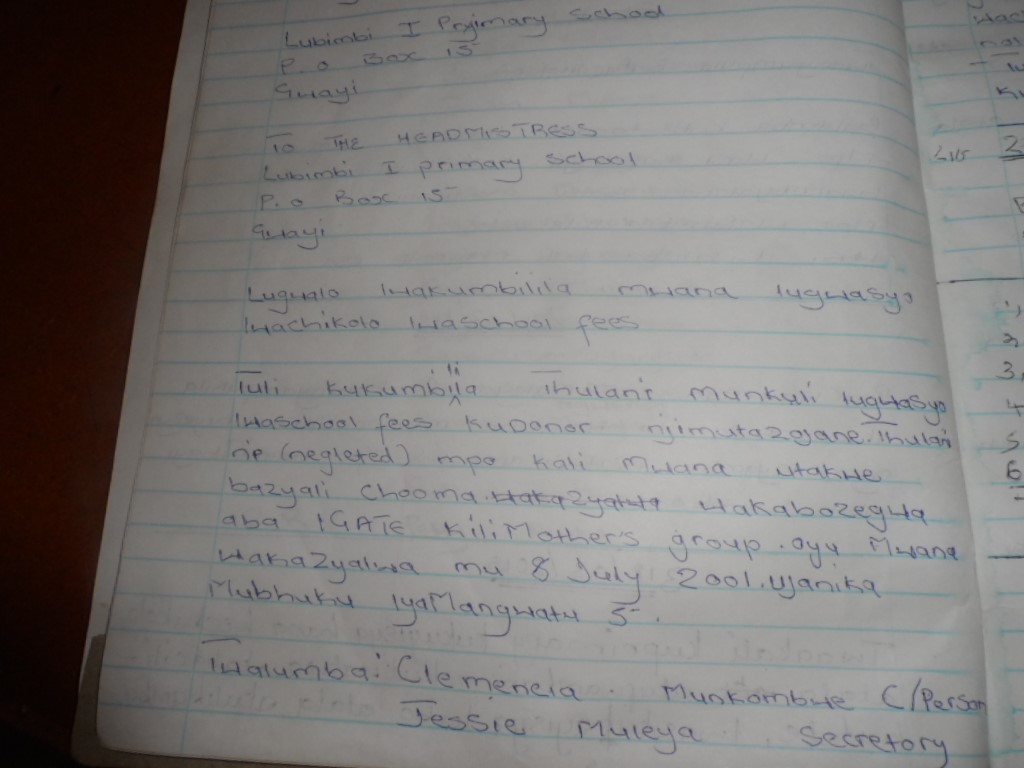 The application letter written by the MG to the school authorities

Thulani is now a happily enrolled grade 4 pupil at Lubimbi primary school (because of his age he skipped grade 3) and his dream is to advance with his education and become a trained professional teacher. 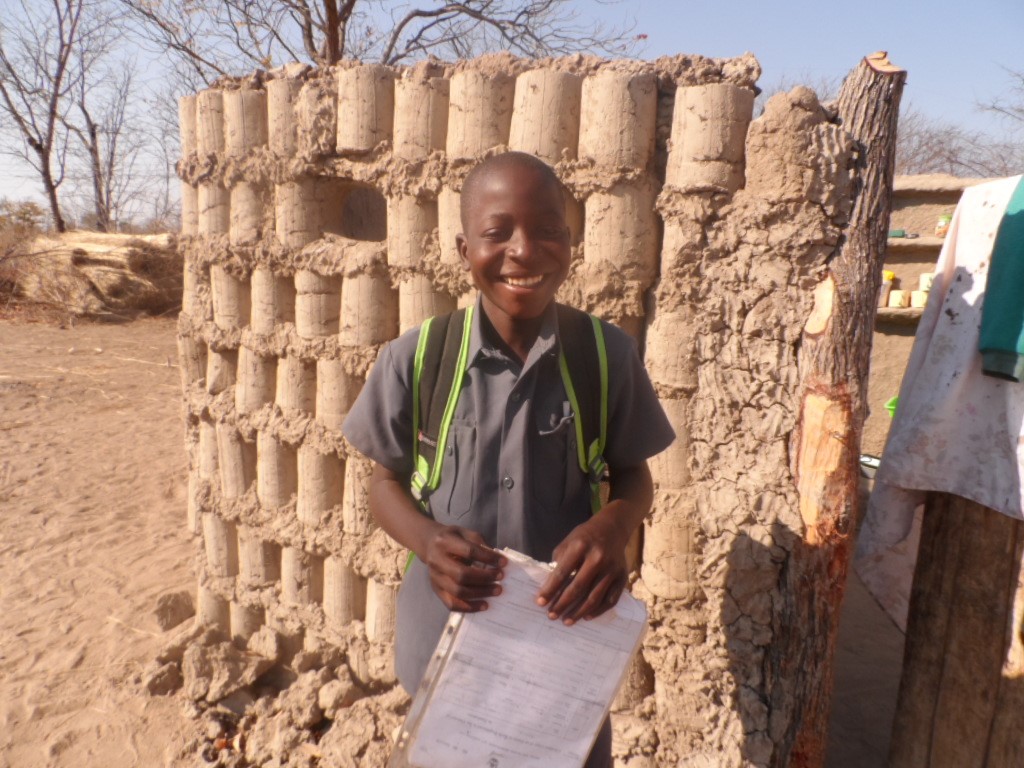 “When I grow up I want to be a professional teacher at my school so that I can be a role model to many people in my community.” He also mentioned that he was getting the encouragement and motivation to work hard in school from his better understanding of education concepts in class. His school report showed that he greatly improved in terms of class position in term two when he came out position seven up from  position 22 out of 39 pupils in term one.

Although the Mothers Group has helped boys like Thulani, this is just a drop in the bucket of their overall impacts in the community.  Their work has ensured that marginalised girls have an equal chance of remaining in school and complete their primary education cycle. Since its establishment in November 2014, it has assisted four children (two girls and two boys) to re-enroll after they had dropped out of school mainly due to lack of learning materials and income for paying school fees. The group has lobbied with school management committee to put measures in place to minimize future drop-outs necessitated by lack of learning materials.  With support from community leaders, the Mothers Group has also been instrumental in raising community awareness on the importance of girls’ education by challenging negative gender norms which hinders girls’ access to school. Through all these concerted community efforts of promoting girls’ education, boys too, have also benefitted in the process.  And to think, this is just the beginning!

Improving Girls’ Access through Transforming Education (IGATE) is a four year project being implemented in Zimbabwe with support from UKaid under its Girls Education Challenge fund. The project is being implemented in ten rural districts of Zimbabwe through a consortium set up which include WVZ (as the lead and implementing agency), CARE International in Zimbabwe (providing technical specialist services on VS&L, MG,PW and Gender), SNV (providing technical support on WASH activities) and local NGOs UDACIZA, EFZ and Great Zimbabwe University. The project seeks to identify and addresses barriers that affect girls’ education

The Unstoppable Foundation is a non-profit organization who brings education and sustainability to people in developing nations.
Learn More »