Earlier this week, WKBT news anchor Jennifer Livingston responded to an e-mail she received from a viewer telling her that being overweight was a bad example to the citizens of the local community. She stated "I am much more than a number on a scale" and sent the message that one should not allow bullies to define a person's self-worth. She ended by stating "...the cruel words of one, are nothing compared to the shouts of many." 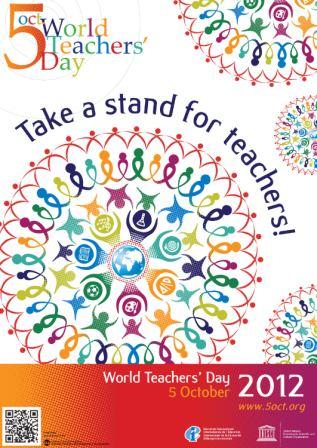 According to the UNESCO Institute for Statistics, an additional 1.7 million teachers are needed worldwide in order to reach the 61 million children who still do not have access to education. Even more disturbing are the statistics that show how simply providing access to a classroom has not resulted in learning. Recent reports have drawn attention to the fact that in many countries a child can attend primary school for 3-5 years and still not be able to read a single word. High absenteeism, corruption, incompetence, apathy - these are words I have heard in briefings in Washington, DC when blame for this learning crisis is laid at the feet of the teachers. Bullying is a learned behavior that simplifies complex situations and relies on a negative stereotype to attack a voiceless and less powerful victim.

During the United Nations General Assembly, the Global Campaign for Education and Education International launched the new campaign, Every Child Needs a Teacher. The report, Closing the Training Teacher Gap, describes the challenges teachers face in high poverty regions of the world, such as:

• Teachers barely make a living wage in some countries and may have to travel great distances to collect their paychecks, which are sometimes weeks or months late.

• In many countries, class size is overwhelming. It is not unusual for classrooms in parts of sub-Saharan Africa to have more than 30 or 40 students per one teacher.

• World Bank and IMF financing conditions have resulted in poorly prepared teachers. In Togo, for example, "structural adjustment" policies led to the closure of teaching training programs. The cost-cutting solution in other countries to the teacher gap has been the hiring of para-educators and hiring teachers with little to no actual preparation.

Around the world, isn't it time we take a stand against macroeconomic frameworks in development aid that create conditions that do not adequately fund high quality teacher training programs, create class sizes that make it impossible to attend to each child's leaning needs, and do not respect teachers as professionals nor compensate them with an adequate living wage?

In our daily lives, isn't it time we each do our part to stand up to bullies and become the "shouts of many" to give teachers the respect they deserve?

Lisa Swayhoover is the co-chair of the GCE-US Communications/Grassroots Working Group. She is a Senior Policy Analyst in the Center for Governance, International Relations at the National Education Association.

Click here to send World Teacher's Day e-cards to a teacher or colleague!

Click here, to read the report, Every Child Needs a Teacher: Closing the Trained Teacher Gap.