Our advocacy for education benefits from Christy's and my own background in film, television and journalism. In ten years, The Nobelity Project has made three feature docs and fifty short films - most related in key ways to education. Those films have screened in festivals, theaters, schools, online and on DVD. Crunching viewer data into measurables is inexact to say the least, but telling stories is who we are, and telling stories is how every education non-profit can inspire others to take up this great, shared mission of a quality education for every kid in every land.

The largest impact of our film work has been to turn inspired viewers into inspired actions. While the investor proceeds from many independent films are measured in dollars (made or lost), our profits have been measured in change. Without the films and the support of those who believe in them, we could never have joined hands with community partners on development projects in multiple countries, including in Kenya where we've built a hundred classrooms, water systems, science labs, libraries and computer labs.

In most instances, these projects have been guided by the simple idea of "bridging the gaps". In Kenya where we partner with rural public schools, the gaps have been obvious. Since clean water is the first critical component to education, our first step is often to team on providing it. A rainwater collection system with gutters, solar-powered UV-purification and one or more 10,000-liter ferro-cement storage tanks can cost under $10,000 - a small price for providing years of clean water, reduced illness and increased attendance for hundreds of kids. 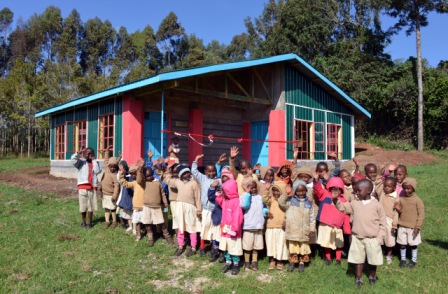 With 1.3 million kids having flooded into Kenyan primary schools in 2003 after the advent of free, primary education, there've been big gaps in the number and quality of primary classrooms. Partnering on new primary and preschool classrooms with adequate light and comfortable conditions has been a bridge to better KCPE scores at the completion of the 8th grade, and - often just as important as the numbers - a sense of hope that eight years of education will be a bridge to a future instead of a dead-end road.

As those added 1.3 million primary students completed primary school, it became clear that Kenya had a huge gap between the number of prospective secondary students and the number of high schools. When the community of Mahiga asked us to help them build the area's first high school, the closest secondary was a six-mile walk. The opening of Mahiga Hope High helped close that gap - as have two more secondary schools we helped build in the Kieni West Education District. A hundred kids a year are graduating from those high schools - not a world-changing statistic, unless you happen to be one of those students. 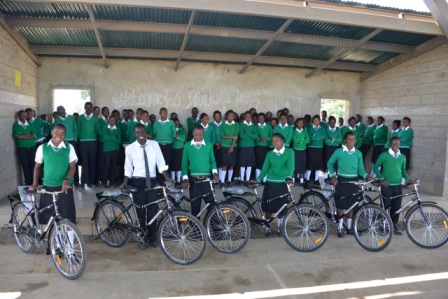 Since high school in Kenya is not free, there's also a gap between school costs and parent's ability to pay fees. To incentivize students and support parents, we tried free tuition for top girl and boy scholars, but found that a new bicycle awarded to the top scoring boy and girl in the Form 1 thru Form 3 classes resulted in stronger competition and better over-all scores. Top scoring Form 4 graduates receive a laptop for their upcoming enrollment in college or university. When students are fully committed, we've found that parents are more likely to do their part.

There is a giant gap in the ability of students and parents to afford higher education. Those top-scoring students graduate with good grades, but without funding, it's often impossible for them to continue their education at a college or university. Higher education support to qualifying top scholars is also showing inspiring results. Here's a link to a thank you video from some of our top Mahiga Hope High grads who've qualified for and are excelling in their higher education pursuits.

At this point, it doesn't appear that the next set of global development goals will include four years of high school. Two years is certainly better than none, but it's clear that all of us who are committed to Education for All will be bridging the gaps for many years to come. Great progress has been made since the launch of MDG goals. Though the cumulative impact of countless small NGO's and community partners can't replace the underlying education funding from global institutional partners, the small stories still stand tall as inspiring reminders that education goals are both achievable and critical to a peaceful and productive world.

We're all in this together. And now is the time for all participants to stand up and say, "We're all in."

The Center for Universal Education at Brookings

The Center for Universal Education at Brookings develops and disseminates effective solutions to the challenges of achieving universal quality education.
Learn More »