The Day of the Girl campaign is an international effort to highlight and rectify the struggles girls face and to create more opportunities for them. The United Nations declared an International Day of the Girl Child on December 19, 2011, as a result of campaigns led in numerous countries, including the United States. The US Campaign was led by School Girls Unite, an organization of students and young women leaders dedicated to confronting prejudice against girls and increasing their freedom and opportunities through education and leadership. One of the central issues tackled in this campaign is the denial of education for girls worldwide, and by spreading the word of how girls' education is crucial to the advancement of human rights, our world will come radically closer to becoming a more secure; liberated place to live. 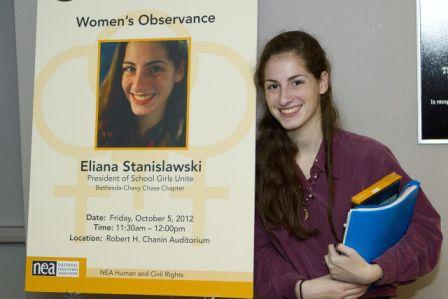 However, the mission of the Day of the Girl spans beyond awareness. Girls across the US are taking part in the Day of the Girl Proclamation Project. It aims to get as many Day of the Girl proclamations in as many American cities, towns, and states as possible-- all initiated by young women students. The steps to attaining a local proclamation is an educational, and this project is exposing girls across the country to this leadership-building process as well as the structure of their government. By educating others on the importance of women, these girls are affirming themselves as important women in their community. Recently, the first state proclamation was approved by Maryland Governor Martin O'Malley, and over 100 proclamations are underway, several of which have been approved by government officials already. This initiative takes a "Day," that could just be treated as any other commemorative date and turns it into a movement, creating a new generation of female leaders enable other women to become leaders as well, and so on.

Still, though, the acknowledgement of the importance of girls' rights is no small event. Throughout history, women's' voices have been muffled, and now they are finally being released and recognized as valuable. On the US Day of the Girl Campaign's website, the first couple reasons that more awareness must be raised about girls issues deal with the amount of girls denied their right to education, and almost every other reason listed can be linked to the former crime. I know that I am incredibly lucky to have the opportunity to work at the Global Campaign for Education, and thank my lucky stars that I fell into the 47 percent of literate girls on our planet and that I am not the one in every seven girls who are subjected to child marriage. In order for every girl to have the same opportunities as I do, I support and work with the Day of the Girl Campaign. I want to play my part in the effort to break the intergenerational poverty cycle, and providing girls everywhere with their necessary rights is an indisputable component of that.

Eliana Stanislawski is a senior at Bethesda-Chevy Chase High School in Bethesda, MD. She is the current President of the BCC Chapter of School Girls Unite and is a GCE-US intern.