Wherever you go, your education goes with you

The facts are stark. In 2014, UNHCR – the UN Refugee Agency – estimated that 51.2 million people were living as refugees or internally displaced persons globally. What might seem like a temporary predicament often leads to a long-term reality. In fact, the average length of displacement for refugees is 17 years, and 20 years for those internally displaced.

While emergency needs – including food, water, shelter – are critical for survival, so is creating hope and investing in the future of those who are forced from their homes. Education offers that hope. 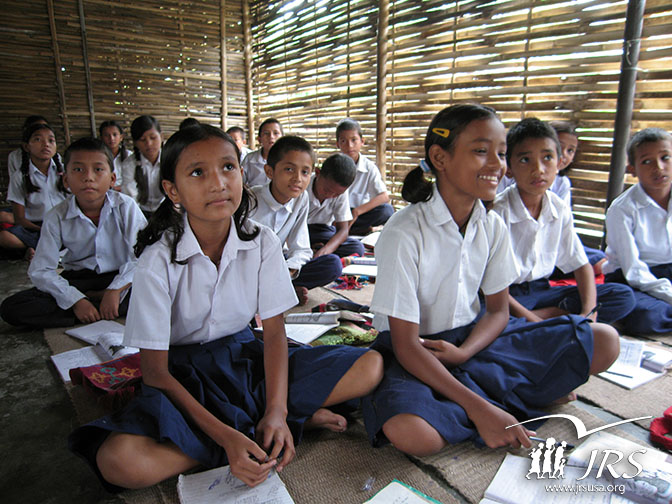 As an NGO that provides education to displaced persons in 37 countries around the globe, we at Jesuit Refugee Service/USA know this work well. But when you’re able to meet someone who lived it firsthand and see the fruits of investment in education, it’s awe-inspiring.

I had that opportunity when Indra Acharya visited JRS/USA headquarters in Washington, D.C. Indra is like any other young college student navigating his way in a new city, working through his class load and making new friends. Except his journey is not ordinary.

Indra was born in a refugee camp in Nepal after his parents were expelled from their home country of Bhutan. He describes growing up in constant fear for his life with little food and clothing and no identity. Yet, “education was something that my family prioritized.”

Indra enrolled in a JRS-sponsored school and a world of opportunity opened for him. He remembers the quality of the education he received – leaving the camp for the first time in his life to travel to India to attend a student conference in 6th grade; having access to microscopes for science experiments, something unheard of in the larger community outside the camp. He assumed leadership positions and began to dream about his future. JRS was the only education provider in the camp and he is thankful, “I am who I am today because of my education.”

In 2012, Indra and his family resettled in the United States, establishing a new home in Vermont. As with many refugees, the transition was challenging, but his focus was clear. He knew he wanted to continue his education and attend college, “My preparation for college was in the refugee camp.” He enrolled in high school and began taking college-level courses. He applied to college and today he is a freshman at Georgetown University. He has plans to one-day serve his new country in government and continue advocating on behalf of the poor and displaced.

In many ways, Indra’s story is unique, but in many ways it is all too common. As a global community, we must support efforts to ensure that every child has access to an education regardless of their circumstances. Refugees and those who are forced from their homes are not to be forgotten.

Giulia McPherson is the Assistant Director for Policy at Jesuit Refugee Service/USA. JRS is an international Catholic NGO whose mission is to accompany, serve and advocate for refugees and other forcibly displaced persons.  JRS works in more than 50 countries worldwide, and enables approximately 240,000 children, young people and adults to receive primary, secondary, tertiary and vocational education services each year.

Focal Point Global (FPG) is a 501(c)(3) organization with the mission to educate and empower the world’s youth to address social issues and create social change.
Learn More »