SchoolCycle: How One Bike Can Change the Life of a Girl 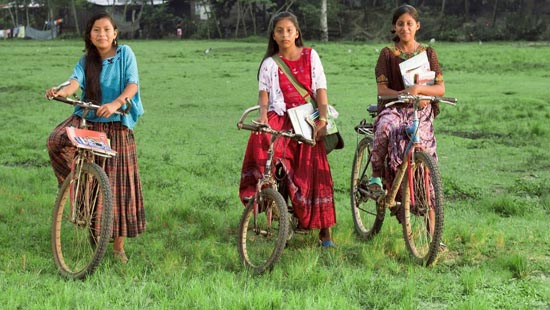 More than 62 million girls around the globe are out of school. Not one million, not 10 million, but 62 million girls. As a young woman, it is astonishing that such a staggering number of girls have never gotten the chance to go to school and broaden their horizons like I have. There are many reasons that these girls aren’t attending school. In some cases, girls are prevented by their families from receiving an education, while others spend their days at farms and factories trying to earn an income to support themselves and others. Still, others face safety risks and lack the reliable transportation needed to get them to school securely.

When I visit Bangladesh, my parents' home country, I have seen firsthand how many girls have to travel long distances with insecure modes of transportation to get to school. Some girls have to trudge through miles of unpaved roads, waking up early in the morning for the long journey, while others use homemade jute rafts to move through Bangladesh’s many rivers.

My experiences in Bangladesh and my role as a Girl Up Teen Advisor have made me a passionate advocate for girls’ education, which is why this December I am supporting SchoolCycle. SchoolCycle is Girl Up’s holiday giving initiative, which aims to raise $125,000 by December 31 to provide bicycles to adolescent girls in Guatemala so that they can get to and from school safely. Girl Up currently supports UN programs in several countries, including Guatemala. Through the SchoolCycle initiative, Girl Up will raise money for the United Nations Population Fund (UNFPA), a UN agency which will ensure that bicycles reach some of the hardest-to-reach adolescent girls in Petén, Guatemala.

For $125, a girl will receive a bicycle, bike parts, and training, giving her the literal wheels to success. Though a bicycle may seem simple, it will allow a girl to go to school every day, empowering her through independence and education. In a region where almost half of girls have a child before the age of 20 and where six out of 10 girls drop out of school before the age of 15, a single bicycle can be the insurance a girl needs to stay in school, prevent child marriage, and elevate her economic status later in life.

I hope that with your support, we are able to ensure that these girls in Guatemala are able to stay in school. Please visit Girlup.org/schoolcycle/ for more information about SchoolCycle. She’s already going places. With a bike, you're helping her go further.